“After the novel, and subsequently cinema privileged narrative as the key form of cultural expression of the modern age, the computer age introduces its correlate – database.”

Electronic literature can shapeshift randomly by resorting to a database of images, sounds or words. The following works were “subjected to the knife of the cut-up”. Some of them could be described as a “generated text cascading down the screen”. In this strand, you will have the opportunity to read “computer-generated combinatorial” stories as if you were conducting an “experiment in electronic narrative”. Furthermore, you will be invited to “uncover poems” that “promote the generative potential of an algorithm”.

– Self Portrait(s) [as Other(s)] (2003), Talan Memmott – In this piece, both painting and textual biography are subjected to the knife of the cut-up — a particularly suitable set of incisions given that the textual cut-up technique was first used by painter Brion Gysin. Memmott’s juxtaposition reveals some of the different qualities of text … END_OF_DOCUMENT_TOKEN_TO_BE_REPLACED

– Along the Briny Beach (2012),  J. R. Carpenter – For this generative poem J.R. Carpenter infused the Taroko Gorge source code with coastal language, and used the HTML marquee tag JavaScript to insert other beach themed texts and images into the generated page (see the credits). What she assembles on the screen for us … END_OF_DOCUMENT_TOKEN_TO_BE_REPLACED

– Storyland (2004), Nanette Wylde – – THIS WORK IS CURRENTLY UNAVAILABLE DUE TO ADOBE FLASH’S DISCONTINUATION – The computer-generated combinatorial story is one of the oldest forms of writing. Storyland, with its simple circus frame, plays with this tradition by performing recombination of the sort seen in cut-up and in Oulipian work. The system … END_OF_DOCUMENT_TOKEN_TO_BE_REPLACED

– Façade (2005-2012), Michael Mateas and Andrew Stern – Façade is an artificial intelligence-based art/research experiment in electronic narrative – an attempt to move beyond traditional branching or hyper-linked narrative to create a fully-realized, one-act interactive drama. Integrating an interdisciplinary set of artistic practices and artificial intelligence technologies, we have completed a five-year collaboration to … END_OF_DOCUMENT_TOKEN_TO_BE_REPLACED

– Cyberliterature (“Theory of the sitting man”) (1977-1993), Pedro Barbosa – Cyberliterature (1977-1993)’ includes six computer-generated poems, in Portuguese and English, which were originally programmed by Pedro Barbosa in 1976 using Fortran and Basic. This new version of Barbosa’s works includes, besides the generation of text, the source code of the poems, as well as … END_OF_DOCUMENT_TOKEN_TO_BE_REPLACED 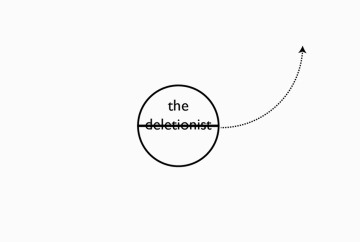 – The Deletionist (2013), Amaranth Borsuk, Jesper Juul and Nick Montfort – The Deletionist is a concise system for automatically producing an erasure poem from any Web page. It systematically removes text to uncover poems, discovering a network of poems called “the Worl” within the World Wide Web. in ELMCIP About the Authors: Nick Montfort develops … END_OF_DOCUMENT_TOKEN_TO_BE_REPLACED

– Looppool (1998), Bas Boettcher –  – THIS WORK IS CURRENTLY UNAVAILABLE DUE TO ADOBE FLASH’S DISCONTINUATION – First produced in 1998, Bas Böttcher’s Looppool marks a specific generational moment in the history of online poetry and netart. Simple yet delightful, its palindrome title playfully describes the Sisyphean loop of wandering red billiard balls through a … END_OF_DOCUMENT_TOKEN_TO_BE_REPLACED

– Stochastische Texte (2010), Johannes Auer – At this stage we shall report on a program which the author recently executed on the electronic mainframe ZUSE Z 22 at the T.H. Stuttgart Computer Center. The machine was used to generate stochastic texts i.e. sentences where the words are determined randomly. The Z 22 is especially … END_OF_DOCUMENT_TOKEN_TO_BE_REPLACED